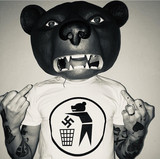 Notable for their eclectic musical style as much as for wearing large bear heads, Teddybears were formed in Sweden in the early '90s. Although the group -- whose members also direct videos, short films, and commercials -- takes on a variety of genres including electronic, dance, rock, and reggae, Teddybears' original incarnation was as a grindcore band. Members Patrik Arve and Joakim Åhlund (who is also guitarist for the Caesars) had met in art school in Stockholm, soon adding Åhlund's brother Klas on guitar. In defiance of typical grindcore band names, the group switched its first name, Skull, to Teddybears, named after a band from the '50s featuring Phil Spector. After Teddybears' drummer left, the other members relied upon drum machines, guitars, and vocoders. The result was the electronic-leaning Rock 'n' Roll Highschool in 2000, followed by Fresh in 2005. Signing on with Atlantic, the band's first U.S. release, Soft Machine, came out in September 2006 and featured guests Iggy Pop, Annie, Neneh Cherry, Mad Cobra, and Ebbot Lundberg of the Soundtrack of Our Lives. Devil's Music followed in 2010, starring the likes of Eve, B.o.B, the Flaming Lips, CeeLo Green & the B-52's, and Robyn. After years of silence, they returned in 2015 with teaser tracks featuring reggae star Beenie Man and dancehall king Cutty Ranks. They released Rock On in early 2016. ~ Kenyon Hopkin, Rovi