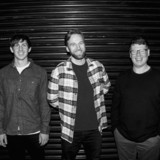 We Were Promised Jetpacks

Featuring We Were Promised Jetpacks

Driving melodies, searing vocals, and heart. We Were Promised Jetpacks arrived on the indie landscape with a bang in the late 00's, and since then have consistently produced music that hits the core of every fan. Adam, Darren and Sean have been friends and band mates since high school, growing up in Scotland's capital city, Edinburgh. Ever since they cruised to victory in school battle of the bands, they never looked back. With monster albums These Four Walls (2009), In the Pit of the Stomach (2011), Unravelling (2014), The More I sleep the Less I Dream (2018) in the back catalogue, the next highly anticipated release from WWPJ is awaited with bated breath.