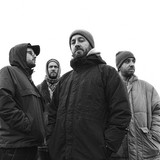 Move 78 are a Berlin-based four-piece jazz band consisting of Doron Segal (keyboards), Nir Sabag (drums), Hal Strewe (bass) and Aver (sampler/production). They released their debut EP, The Algorithm Smiles Upon You, in Spring 2021, selling out the first two vinyl pressings, receiving national radio play in Germany, Japan, USA and UK, and being place on various Spotify editorial playlists. The band's music is crafted from hours of studio improvisations that have then been chopped-up, rearranged, and layered with additional strings, flute and horns. This many-layered approach has helps to create the band's signature sound: a balance between free flowing jazz and automated, programmed hip-hop. The band name is inspired by a famous Go match (an ancient Chinese board game) between Lee Sedol, the world champion of Go at the time, and a computer program named AlphaGo. Having been destroyed in the first three games of the five-game match by his AI-powered opponent, Sedol stunned spectators and commentators by adapting and playing a move so strange that it completely baffled AlphaGo and its algorithms, leading the program to scramble for historical data to make sense of it. The move - which represented Sedol's human response adapting to meet the challenges of an ever-evolving technological world - was move 78. Automated Improvisation, the band's first full length album is due for release Spring 2022.