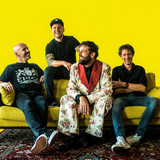 Dutch punk rock band Heideroosjes formed in 1989 when four kids decided to fight boredom in the small city of Horst (Holland). At that time mainstream record companies weren't interested in melodic punkrock with lyrics in both English and Dutch. So the teenagers released four albums on their own label Fairytale Records. In the meantime Heideroosjes played every stage they could find. It gained them a solid fanbase. The band's first entry in the Dutch album charts came in 1996 with the album 'Fifi' which stayed in the charts for 22 weeks. In the late '90s, the band came to the attention of Epitaph Records and was signed to a worldwide record deal, releasing five albums between 1998 and 2004. In that year the band also received a Dutch Grammy Award for their song 'Damclub Hooligan'. The band played over 1500 shows, not only in Europe but also in the US, Japan and South Africa. The album

Cease-Fire also made the Top 100 Dutch album charts and marked the announcement of the band's breakup in September 2012. In 2019 the bandmembers re-united celebrating the 30 year history of the band. All anniversary clubshows sold out in just a few minutes time. After this successful short tour they parked their tourbus again leaving their supporters with "we'll see what happens in the future".