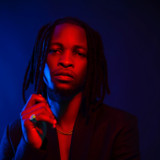 Laycon is a Lagos born and bred artiste who is signed to Fierce Nation entertainment. Laycon started out his musical journey very early, developing his art from Secondary school. He got introduced to Hiphop and rap music and later on crossed over to other genres of music. He says about his musical style "I diversify my creativity as much as I can and strive to get more versatile. I can rap and I can sing. I also play some music instruments so I’m a mixture of everything". Laycon's consistency and creativity was noticed by several record labels and in late 2018 he signed to Fierce Nation , a budding record label known for their positive work with several young, talented Nigerian creatives. In the second half of 2019, Laycon put out two weekly visual project, titled “Any Given Monday I & II” which were compliments to his first label single release 'Fierce' featuring Chinko Ekun & Reminisce. Laycon kicked off 2020 with his much anticipated “Who Is Laycon” EP,

released on April 2020. He won the Nigerian Big Brother