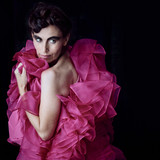 Annakin is a singer, songwriter and composer. She has released eight albums so far - two with her former band Swandive and six as a solo artist. In the past she has collaborated with musicians such as the double bassist Mich Gerber, singer and songwriter Adrian Weyermann, the Zurich Chamber Orchestra, Fiona Brice (Placebo) and Ben Christophers (Anna Calvi, Bat for Lashes) . Other collaborations include the famous hang player Manu Delago (Björk, Anoushka Shankar), with which Annakin worked on her record «&nbsp;Stand your Ground&nbsp;». All of Annakin’s albums are highly praised by the press. With the forthcoming album «&nbsp;The End of Eternity&nbsp;» (out April 27) she is going back to her trip hop roots. It’s the 4th album she produced with the Music Producers Guild Award nominee Dimitri Tikovoi. All of her releases appeared in the Swiss album charts and stayed there for several weeks. She has received numerous awards and nominations for her music and her videos (among which Best Video at First Glance, Philadelphia 2009). In parallel Annakin has been writing for short films such as the award-winning (Monaco Luxury Award 2012) image film by Christian Amman for the company Huguenin.ch and the Irish fashion film trilogy DAIS (nominated at La Jolla Film Festival in California, 2011). &nbsp; From 1995 till 2002 she was the singer of the former Trip Hop group “Swandive”. The band was highly acclaimed for their unique music and their live concerts throughout Europe.