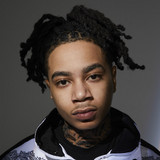 Multi-platinum certified rapper and member of the 2018 XXL Freshman Class, YBN Nahmir has fully manifested his farsighted musical imagination with his debut album VISIONLAND via ART@WAR/Atlantic Records. The impressive 20-track body of work dives deep into Nahmir’s own world while including features from music heavyweights such as Ty Dolla $ign, 21 Savage, G Herbo, G-Eazy, Offset, E-40, Too $hort and more. Defiant and dark while simultaneously presenting multiple new facets of Nahmir’s distinctive artistry, VISIONLAND is an indisputable hip-hop landmark and a milestone debut for a truly one-of-a-kind new star. VISIONLAND reminds fans and the industry of the raw talent and lyricism that catapulted the rapstar to the pinnacle of modern hip-hop. YBN Nahmir started rapping when he was 13 using a microphone from the video game Rock Band with a napkin draped over it, but eventually saved up $40 for the Blue Snowball mic with which he recorded his RIAA platinum certified breakthrough single, “Rubbin off the Paint.” The track proved a true phenomenon upon its 2017 arrival, reaching Billboard’s Hot 100 with 300 million streams and 200 million views to date. YBN Nahmir has been on an extraordinary creative run these past two years, highlighted by the breakthrough success of 2018’s RIAA gold certified YBN: The Mixtape with over 1 billion streams to date.