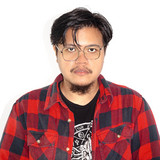 Calix is a rapper based from Manila, Philippines. He started posting songs on Soundcloud anonymously around late 2015. Finished his first mixtape Breakout Satirist July 2016. Had his first live performance at a small Makati cafe, accompanied by NoFace Record’s very own skinxbones. Calix released his second offering The Lesser of Your Greater Friends Aug 2017, with the help of established and fresh artists across the Philippines. Calix released his third album IKUGAN May of 2018. Calix produced and written songs for KOLATERAL — An album based on research about the bloody Philippine war on drugs. Calix' 4th album is slated for a 2021 release.