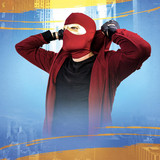 Sound of Legend, is the story of a band of 3 Producers created in 2016 and represented by a Super Hero called Zach. His taste for discretion can be noticed even about the way he dresses since he always wear a masK ... They covered Legend’s Sounds like Malosax , Komodo, Blue Sweet (La La La ), Infinity, Push The Feeling On, Flashdance, What A Feeling, Bella Ciao, Hold That Sucker Down Tell Me Why, All That She Wants and brought them back to the taste of the day with each time an epic and energetic touch. Strong in this unique style, Sound Of Legend becomes an inescapable group on the electronic scene. They figure in the best European rankings and the TOP CLUB CHARTS increasing by the day 80 000 000 STREAMS.

Their Tracks are playlisted and supported by the biggest Dj’s in the world like : David Guetta, Don Diablo, Hardwell, Robin Schulz, Blasterjaxx, W&W, Maurice West, Dada Life, Lost Frequencies, Juicy M, Dannic, Oliver Heldens. With more than 8 million Streams on their latest single "When The Beat Drops Out", at the end of the year, they return with the single "Replay", cover of the famous Rnb Track of Iyaz written by Jason Derulo. An innovative track, combining an energetic electro rhythm and a catchy RnB vocal that will not leave you indifferent.