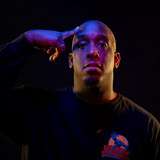 Derek Minor has earned the title of veteran in the game not only as a rapper but also as a producer and businessman. After a decade of making music, the award-winning artist has established himself as a leading voice of hope in the midst of darkness. Among his achievements include a Gold plaque for producing Lecrae’s “Dirty Water” off the 2014 album, Anomaly, and a Grammy for his production work on Lecrae’s 2012 album, Gravity. Derek Minor has also had commercial success with his own music, twice placing on the Billboard 200 chart and reaching the #5 position on the Top Rap Albums chart with 2016’s Reflection. He has been the voice behind some of America’s most hyped sports moments of the time as his music has been featured by the Los Angeles Chargers, Los Angeles Rams,

Philadelphia Eagles and, most recently, by ESPN “Faces of Free Agency” campaign that anticipated major moves from NBA superstars Kawhi Leonard, Kevin Durant, Kyrie Irving and Kemba Walker. In 2009, he founded Reflection Music Group with producer and former Syndicated Mix Show host Doc Watson, which boasts a full-fledged label and marketing service, RMG Amplify. This is one of Minor’s greatest accomplishments as he now passes the baton to his roster of artists who are fresh voices of triumph.