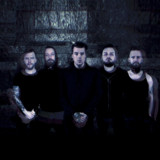 Formed in a place known mostly for its death metal acts such as Behemoth, Decapitated or Vader, Poland gave birth to IAMONE on April 2018, but the project goes as far as late 2015. Starting with a music video for their first single "Of Life: Awakening" right away, IAMONE continued to promote themselves with another 2 singles in the upcoming months for "Of Space: Infinitude" and "The Answer // Forty-Two" as well as a Short Film "L I F E" teasing the upcoming album. The band released a hour-long 13 songs story, concept album "The Life Code" just only four months later. They quickly defined their style and got embraced by fans with their roots coming from all different kinds of styles and genres. "The Life Code" forged a path of complex compositions with low tuned, heavy guitars, polyrhythmic drums, mixed with unique, angelic orchestral, ambient and film score music as well as piercing vocal lines, quickly becoming a staple of the band's sound. The debut concept album has been written as a one piece, and every song is a chapter of a one story. The album proceeds to dig deep into the concept of life and its various aspects with songs referring to each other both lyrically and sonically, creating a musical journey suitable for all kinds of musical tastes. IAMONE can't be simply defined as a one genre.