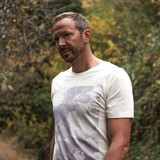 Of course, the easiest way to introduce Ripperton would be to mention a music career that spans over two decades and a body of work that includes three highly praised albums on Green and ESP institute, essential collaborations with fellow countrymen Mirko Loko (as Lazy Fat People ) and Deetron (as RootsPanorama) as well as stellar remixes for Laurent GarnierRadiohead, Beanfield or Joris Voorn. We could also point out that his music has been released on labels as prestigious as Planet E, Border Community, STHLM audio, Innervisions, Maeve, Systematic, Connaisseur or the infamous Music Man. Not to mention that his own label Perspectiv published 50 releases which were at the forefront of electronic dance music back then… But no, we won't mention all that. Let's keep it modest and focused on the here and now. For example, you should know that despite releasing an ambient album (and working on a promising live set that prolongs it), Ripperton doesn't want to stop making House and Techno… no, that would be too easy! So instead he keeps forging an exciting musical path by releasing his own tracks and those of other luminaries such as Isolée, Bicep, Quarion, Iron Curtis or Baikal on his excellent Tamed musiq imprint (distributed by dutch institution Clone) and by working on a modular-based live set with techno hotshot Opuswerk.