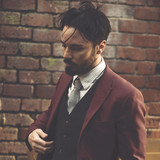 KaiL Baxley’s songs cut right to the bone for many reasons, so pay attention. First, there’s the cast of characters from the deep south, who he carries with him every day. There’s his father, an outlaw who he only met twice but insists is a good man. Then there’s his mother, who he visited on sundays at the state penitentiary as a child. And her fellow inmate James Brown (yes, the James Brown) who sang at that prison’s church and taught a shy Baxley how to dance. And there's his grandfather, whose anecdotes and wisdom Baxley will be quoting ad infinitum. Finally, there’s the best guitar player he's ever met: his small town's local mechanic. Second, there’s the stories which Baxley’s hesitant to share, the stories hidden behind his poignant, timeless songwriting.

A Golden Glove boxing campions dream of fighting for the US olympic team sidetracked by a run in with the law. A string of promising college football scholarships derailed by a run in with the law. The gunshot wound on his left shoulder he probably will never mention. The loss of a close friend honored in his devastating song “Chasing James Dean.” How he drove across the country to LA without much more than a guitar. How he was so poor, he slept in an RV for 2 years on Selma blvd in order to pay for his first record Heat Stroke / The Wind and The War. And how, astonishingly, that record, a soul wrenching mash of gospel, soul, blues and damn good songwriting, went on to be nominated as album of the year by NPR.