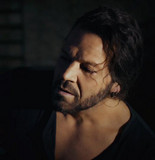 Angelo Minoli is an Italian actor, musician, singer- songwriter, producer. When he was a teenager formed his first band when he was studying at the High School playing live covers of the rock bands of the 70s such as

AC DC Aerosmith Van Halen... In 1992 Minoli joined a local band ‘Rattle Rattle’ as a singer and guitarist, achieving remarkable results : in 1995 they were invited to a live performance on Rai3, the Italian national public broadcasting company. The band performed a tribute to Van Halen and David Lee Roth in 2006 at the Master of Rock Festival in Germany.In 2006 he recorded a demo –CD ‘Angelo Minoli’ which got good responses in the national music magazines. Rock Hard magazine defined Minoli a ‘top class rocker’ and Metal Maniac described his music as a good American rock interpreted with a full bodied , confident voice. In 2008 he was the frontman of a band bearing his name in the annual American 3-day hard rock Rocklahoma Festival in Oklahoma , USA. In the same year he signed a contract with the American Record Company Chavis Records and released his first album Living in Memphis. In 2012 Angelo Minoli performed as a singer and guitarist in a live concert with Ian Paice ,the world famous Deep Purple drummer, playing songs from the Living in Memphis album. Angelo Minoli’s career goes on , he is presently playing with his own band performing rock songs composed by himself and in the near future he is going to release his new album produced by Massimo Satta.