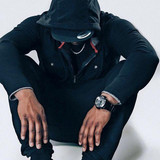 In Short Fitted has headlined two independent east coast tours as well as received regular rotation on local radio stations including but not limited to WAJZ -JAMZ 96.3. Since 2011 he has shared the stage w/ The Wu-Tang Clan, Big Sean, Roscoe Dash, LiL Kim, Dmx, G-Eazy, Machine Gun Kelly & many more. “Fitted” was featured front page of the area’s largest Newspaper (The Times union) and also (The Daily Gazette) in 2012 making him a staple in the Upstate New York music scene. In 2014 Fitted appeared in 2 national magazines ( XXL Magazine and Hip-hop Weekly magazine.) This lead to a short term agreement for artist development with James Jones who worked in Marketing at Warner Music Group. The agreement lead to Fitted’s first major studio collaboration, music video & live performance W/ Grammy nominated and Multiplatinum Selling Artists “The Nappy Roots” in a remix to Fitted’s original song “Counting Sheep”. From 2015-2018 Fitted made a hard decision to step back from his music career to start & build his own Record Label which is finally set to open to the public in June of 2020. Fitted is also set to release his first debut album in August of 2020 under his company name.   [Currently] Fitteds company is promoting his prior releases via internet. Fitted is set to release 6 singles throughout June-November of 2019. Fitted will also be performing at the 2019 APCA Eastcoast Conference. Fitted’s new website will go live in July of 2019.   Fitted