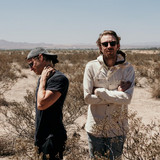 Layup is a new collaboration between singer Chris Henderson, and producer Chad Copelin. The two began working together 7 years ago while recording Henderson’s band, Bronze Radio Return. Over the years, the two formed a creative kinship that allows them to work together that has become the driving force behind Layup. Layup is an outlet for Copelin &amp; Henderson to experiment with different styles to create music without limitations to create a truly unique sound.