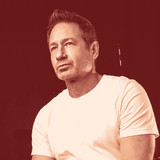 Gestureland (August 20th) is a melancholy, occasionally noisy but ultimately beautiful affair, and another creative triumph for its architect: Musician-actor-author David Duchovny. While fans may know him best for his screen work (The X-Files, Californication), Duchovny has carved out a larger creative role over the years, authoring four books and releasing three albums while earning raves (and a dedicated fanbase) for his live shows. While the feelings on Gestureland are intimate, the music is expansive: It evokes 70s California pop, alternative rock, folk and country. “Nights Are Harder These Days'' serves as a rollickin’ album opener (shades of Neil Young here), while “Holding Patterns” is softer and orchestral. And ballads such as “Pacific Coast Highway,” “Tessera” and “Sea of Tranquility” find the singer in a more plaintive realm. In its own right, it’s timeless music. “I wouldn’t go about imitating anyone,” says Duchovny. “But for me it’s about classic rock, the British Invasion, Bob Dylan, Tom Petty, Aimee Mann — you fall in love with certain sounds.” Most of the album written during a fraught time in our country, reflected most directly on the early single “Layin’ on the Tracks,” an urgent rocker the singer released just before the presidential election. Here, lines like “This civil war we’ve been fighting in/Since before the flood/Yeah, there’s part of us that’s always been/At home in the blood” feel damn prophetic.