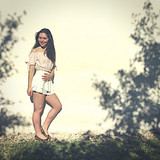 Hi! I’m Juliette Richards, I am 18 years old and I go to school in Cambridge, England. I am a classically trained pianist with a passion for songwriting. Writing songs allows me to communicate my feelings in a way that words alone cannot express. My musical journey began shortly before I turned eight years old when I began to play the piano. I love performing and being up on a stage. I have given my own solo piano recitals here in Cambridge, and I adore sharing my own songs with an audience. In 2015 I won the first prize in the Cambridge Competitive Music Festival and earned the title of the most outstanding performer, and in 2018, I played in London as a finalist of the Royal Philharmonic Society’s Young Instrumentalist Competition. In 2016 I gained a very high distinction in my second piano performance diploma. I love playing the cello as well as I adore its rich and mellow sound, which I bring into my songs for its warmth and depth. I love singing with the piano, but I also taught myself the guitar recently, which is adding a new dimension to my songwriting. I am currently in the process of recording my debut album, consisting entirely of my own original songs, which I am really excited about!