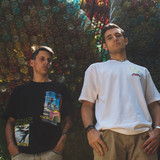 Flash & Dash is a House duo based in Mantua (IT), formed in 2017 by Gian Marco Ricci & Gianmarco Bottura. Delivering bassy tunes since then, they received supports from many worldwide-acclaimed DJ's, such as Nicky Romero, Bingo Players, Fedde Le Grand, Madison Mars, Kryder, Plastik Funk, Gianluca Vacchi, Merk & Kremont, GATTÜSO, Pickle & many others. Their tracks are signed on some of the most spotlighted labels of the recent years, e.g. Hysteria/Spinnin' Records, NoFace Records/Armada, Sony Music Italy, Bounce & Bass, Bourne Recordings, IHU & more. They're currently on the run for their first 1'000'000 streams on Tetris, the hit-collab together with SP3CTRUM which got them featured on Club Beats & Dance Brandneu editorials. 2020 was surely their best year so far, gathering almost half a million yearly listeners and more than a million streams with the support of big playlists such as Operator and Friday Cratediggers. 2021 has just begun and their release "U Got" w/ NOTLEGAL has already been played by all major DJs, with an unexpected support on Rage Beats. They do not intend to stop their climb. Inquiries: flashanddashmusic@gmail.com