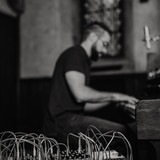 Jameson is a classically trained pianist and composer from Mississippi whose interest in modern electronics and sound design has led to a unique musical language. Blending elements of modern classical and ambient music with the grittier analog textures often associated with Trent Reznor and Atticus Ross, Jameson has created a sound that ranges from intimate and minimal to cinematic and raw. Jameson's growing solo work has led to a number of film scoring opportunities, and he has had the chance to provide music for numerous short films, audiovisual projects, and more recently, his first feature-length film, “concrete_savanna (Original Motion Picture Soundtrack)” which was released through Lakeshore Records. Last year saw the release of his electronic/ambient LP, "Signals," a collaboration with the popular YouTube explorers The Proper People. Jameson has also released a number of singles over the last several months as he puts the finishing touches on a new solo album to be released in 2021. The composer also launched his new solo synth-rock project, Lost Art of Surrender earlier this year. Under this moniker, Jameson combines the grittier electronic textures often found in his film work with more focused songwriting. jamesonnathanjones@gmail.com