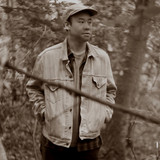 An indie singer-songwriter from Germany. Jonathan grew up in Berlin and discovered his love for music around the age of 14 years, listening to bands like The Shins, Modest Mouse, Bright Eyes, The Killers, Sufjan Stevens, Nada Surf and Death Cab for Cutie. A couple of years later, he wrote his first poems and turning them into songs very soon. After the latest band project split ways, Jonathan chose the name ‘Noir Yon’ in 2019 for his solo project as an output for his thoughts. Projecting the emotions through his voice accompanied by the soothing sound of a guitar creating mostly sad songs. The first song ‘See You Soon’ was released as a live acoustic version in late 2019. In advance to the latest EP the first single ‘Still’ was released in June 2020. He was working on his self-produced record for 4 months. The debut EP ´’So Far So Sad’ was released on the 2nd of October in 2020. It supposed to be an acoustic record at first, but it developed to a wide ranging dream-like indie/dark folk sound creating a mood for listening in a dimly lit room while it’s raining outside. The 7-track EP was recorded and mixed in a small room, whereby every song could stand on its own but also function as whole to tell a story. The first live appearance was earlier this year at an open-mic-show at ‘Barkett’ in Berlin, Schöneberg. The live songs are typically performed as a stripped-down-version. Visit https://noiryon.org for more informations.