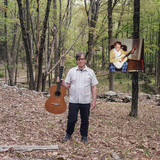 Tim Ruscoe was born in California near San Francisco, lived in and around the Haight Ashbury neighborhood in early college years, and moved east, first to Boston and then to New York City, in his mid twenties.

In NY from the mid seventies to the late eighties he composed and played in a wide range of settings including rock, jazz, and improvised music, and partnered with oboist Nancy Chusid in the instrumental group The Airheads. In the Catskill Mountains since the early nineteen nineties, he has continued to compose and perform regularly. The recordings on the release Two Part are played on a nylon string guitar built in the mid eighties by his father, luthier CM Ruscoe.