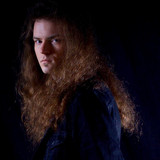 After several short lived Bands Jack decided that going solo as an artist was the logical option for him. This proved to be a success as the 2017 debut Jack L. Stroem album opened up many doors for Jack and spawned even larger opportunites for Vandor whom he joined a year prior. The massive reception of Vandors 2019 'In the Land of Vandor' debut album put Jack's solo work on the side briefly but when the 2020 pandemic cancelled any booked live concerts Jack had time to finish writing his long overdue sophomore solo album (and the two other albums!)