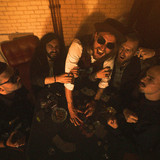 KALAHARI is a metal band born in Forlì (Italy) from an idea shaped in 2015, then realized two years later. The first demo entitled “Re-Burn” is released in 2018 and after one year of gigs throughout the underground scene, they go back to the studio to record their first EP: “Theia”. This record features the singles “Theia”, “Followers of the Lich” and “Zombie Night”. During the same year, the band also releases a re-interpreted version of the Xmas classic “Carol of the bells”. The band members have a musical background that touches different shades of the metal genre. The complicity between them and the passion for music brought them to create a unique blend of sounds, which makes it hard to label them within the Modern Metal panorama. Powerful break-downs and groovy riffs alternate with sinuous melodies: the result is an overwhelming sound, which remains clear and defined. The lyrics deal with social and existential themes and take inspiration from strong feelings and from the events that cause them in the first place. Everything is rigorously presented in a metaphorical key. KALAHARI is music made of strong sensations, that give you chills, and that is what these guys want to deliver to their audience.