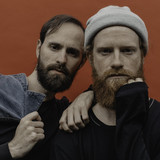 Yoya is the project of longtime songwriting partners Alex Pfender and Noah Dietterich. Natives of Corvallis, OR and friends since the fifth grade, Pfender and Dietterich grew up to the sound of rain in the fir trees and Graceland on cassette. When the duo moved to California they found themselves semi-consciously absorbing the electronic sounds of the LA scene. What emerged was yOya’s unique mix of folk-hearted songs, intricate vocal harmony, gritty synths, and thundering electronic beats.   Their debut album Nothing To Die brought them to stages with Avi Buffalo and Dawes, with its incisive beats and tightly-packaged pop. Their follow up EP Go North and singles Fool's Gold and The Heartwood won them supporting slots for Moses Sumney, Bleachers, and Big Thief, as well as praise from the blogosphere: "walk[ing] the tightrope between the worlds of acoustic folk and electro-pop," wrote BuzzbandsLA's Kevin Bronson, "is an act they continue to pull off with uncommon grace."   Their sophomore LP, "The Half Turn," saw the addition of drummer Ian Meltzer's precision and exuberance. With half an eye to their sonic past, the album brings broader arrangements and deeper textures to bear. Acoustic and electric drums, guitars, and keyboards all circle around a center: Pfender's and Dietterich's vocals, exploring the world as they pass in a half-turn.