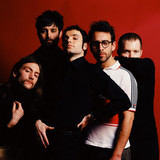 Superet was formed in Los Angeles California on Valentine’s Day 2016. Members Matt Blitzer (vocals, guitar, keyboards) Alex Fischel (Keyboards) Patrick Kelly (bass) Sam KS (drums) and Isaac Tamburino (guitar, percussion, keys) met at Calarts where they lived together and cultivated a deep musical kinship. Three years after graduating, and after a handful of musical endeavors that members were involved in individually (Spoon, Harriet, Sparks), Blitzer had what he calls a “nervous breakthrough”. - “ It was two weeks or so of this sort of manic emotional sensitivity brought on by sleep deprivation. I was up for days, I needed to have a project I could call my own and it was time to call up the guys and claim it. I wrote most of the songs we’re releasing now during that period.” The name Superet was nicked from the facade of a cult church in east Los Angeles. It’s derived from a Latin moniker that translates to “may they overflow”, which has become the bands modus operandi. Hence the name, they have been known to put on a relentlessly, electrifying show. The band co produced their new album 'How To Work A Room' with Dave Fridmann (The Flaming Lips, MGMT, Tame Impala) and is now available everywhere.