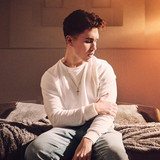 Liam Robert Ferrari, born 12 October 1995, is a singer, dancer and performer from Melbourne, Australia. Liam was first introduced to the world when Ariana Grande retweeted a video of him dancing to Break Free, which was later featured by MTV and other press around the world. It wasn’t long before Liam grew a following of his own, which has now amassed to millions of fans globally. Having never had a label or financial backing, Liam is very much a pioneer of independence and with an impressive 2.7million followers on Instagram and 1million fans on Facebook, he stands as a testament that drive and determination really do pay off. The recent release of Liam’s debut single Run To You in October ’17, saw the young star hit popular Spotify playlists such as New Music Friday and Hot Hits in Australia, New Zealand and Canada, and has lined him up for a very promising career in the music industry. Management: taylor@thehellogroup.com