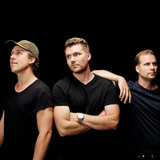 Anand (guitar, production), Bud (vocals, piano) and Dhyan (vocals, bass). Originally from New Zealand, and now based in LA, their music is influenced by the classic rock their father would play to them as children. They are currently making waves for themselves in LA after dropping 25,000 flyers around the city offering a free carwash in exchange for a follow on Instagram, which brought a lot of people to their music at a time when the city was shut down for Covid. Follow them on Instagram for new music, and free car washes 😏