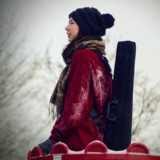 Anna Maria Olsson is a Swedish violinist and composer who specialises in multitrack violin. Using Ableton Live and MIDI pedals to loop and transform the sounds of her instrument, Anna writes and performs original pieces of music inspired by nature, cultures and imaginary places.

In 2016, Anna released her debut album Crossing Lines, which draws on a variety of genres in order to showcase the violin as a highly versatile instrument. The album caught the attention of BBC Introducing and led to multiple broadcasts and a live performance on Radio 3’s In Tune in August 2018. In June 2019, Anna released her second conceptual album Circles, themed around the circulation of time and the cyclic elements in our natural environment. Sign up to the mailing list on www.annamariaolsson.com to find out more.