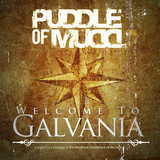 Puddle of Mudd rise from the ashes with their sixth studio album in nearly a decade, entitled Welcome to Galvania. Formed in 1991, Puddle of Mudd has sold over seven million albums and has had a string of number-one singles, including the hits “Blurry,” "She Hates Me," and "Famous." The new album, Welcome to Galvania, was produced by Cameron Webb (Alkaline Trio, Disturbed, Motorhead). It also marks the band’s first full-length album since Volume 4: Songs in the Key of Love and Hate in 2009. “This album has been a long time coming. I’m just so happy to finally get it out there for my fans,” says Puddle of Mudd’s frontman, Wes Scantlin. “I hope the new music inspires my fans to live their lives. I’m just trying to crawl under people’s skin and help them through their life musically.” Puddle of Mudd released their first major album, Come Clean, on August 28, 2001, which spawned the singles “Control” and “Blurry.” These hits propelled Puddle of Mudd to reach the No. 5 slot on the Billboard Hot 100 chart. This success led to the band venturing out on a full-scale European and American tour, hitting the road with Linkin Park, Stone Temple Pilots, and Staind. Come Clean reached triple platinum status in January of 2003.