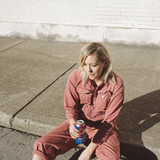 Amy Stroup crafts the kind of songs that transport listeners with rich, emotional honesty and vivid storytelling. Her music has been featured in dozens of television shows, including This Is Us, Grey’s Anatomy, Parenthood, and The Walking Dead, as well major national ad campaigns for brands like Calvin Klein and Lexus. In addition to her critically acclaimed body of solo work, Stroup is also prolific collaborator, teaming up with Andrew Simple to record as Danger Twins (you’ve likely heard their songs in spots for Google, Universal Studios, and New Balance among others) and partnering with Trent Dabbs for Sugar & The Hi-Lows, a playfully retro duo that Rolling Stone said “built a bridge between the rootsy stomp of early Sun Records tunes and the harmonized swoon of old Brill Building pop songs.” The praise was universal and effusive for the Sugar & The Hi-Lows’ two LPs, with USA Today raving that “the only thing better than the bluesy, garage-rock guitars is Trent Dabbs and Amy Stroup’s vocal chemistry,” and Marie Claire swooning for “Stroup’s salted-caramel voice.” With a live show to match their albums’ undeniable charm, the pair earned dates with the likes of Chris Stapleton, Emmy Lou Harris, Kings of Leon, Kacey Musgraves, and Ingrid Michaelson, as well as festival appearances from Austin City Limits to Cayamo.