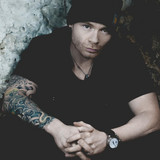 JESSE MADER “J.JAMES” Pittsburgh native Jesse Mader’s reputation for rapid fire vocal delivery, mixed with poppy hooks and edgy urban content began before the times of iTunes & social networks. Jesse sold his first 2 mix tapes from the trunk of his car as a teenager under the name "Jesse James." His local fan base motivated him to create his first studio album in 2006 entitled “J.James: THIN LINE." The title is a metaphor for the mix of styles that influenced Jesse's sound, paying homage to 90's Midwest & West Coast Hip Hop, pop and rock & roll. With the help of myspace, “J.James: THIN LINE” was downloaded around the world. This landed Jesse recognition at Pittsburgh’s Hip Hop awards show in 2006 earning 2nd place under Wiz Khalifa as "best hip hop artist." Jesse released a mixtape of raw recordings entitled “Jesse Mader Presents: J.James Underground” in 2011. Age and experience gave Jesse the ammunition needed for his signature album, “Breath by Breath,” released in the Summer of 2014, highlighting his growth as a songwriter & producer. Regional performances with his high energy band, “Jesse Mader & The Urban Rock Project,” have earned him a welcome reputation as "The Bruce Springsteen of Hip Hop." 2017 and 2018 wrapped up an era for Jesse, as he released a 2-part time capsule album called Through the Years, a nostalgic collection for fans who have been following Jesse since his musical journey began back in 1999 as a young teenager. Official Website: JesseMader.com