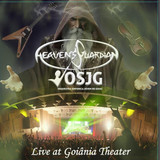 In mid-1997, Heaven’s Guardian began a promising career in the Midwest of Brazil, characterized by the strength and authenticity of its heavy metal. The band released its first phonographic record, the EP “Roll of Thunder”, in 1999. Heaven ́s Guardian thus established a partnership with the Brazilian label Megahard Records, releasing their first album “Strava” in 2001. In 2004, the group released the second album D.O.L.L. by the same record label counting on the production of the renowned producer Paulo Anhaia. The band presented their fans on their 10th anniversary, launching in 2007 the DVD and live CD "X Years on the Road - Live at Gyn Arena".

In 2015 the band signed with the famous producer Marcello Pompeu to record their third album “Signs”, also released by Megahard. The CD was distributed in more than 23 countries by the German record company Pure Steel Records. In 2018, the band completed its most audacious project, the DVD “Live at Gyn Theater” with the Youth Symphonic Orchestra of Goiás. This was the first DVD recorded by a heavy metal band with a symphonic orchestra in Latin America.