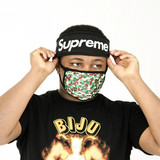 2017 Detox The Kid create his own genre of music called "Trapime," where he merged his Anime influence, with his Rap influence, to make something that says "Hey, this is really who I am." Detox The Kid also released his first notable collaboration, which was a single produced by TT Audi of 808 Mafia, titled "Namekian$," which Detox would refer to as "The first stepping stone of Trapime." As of now, in 2018, Detox The Kid continues to create even more genre-bending music from his own personal studio, in South Carolina. Along with his producer partner, both have come together to release new projects such as his latest single, “Yuri On Ice,” which is available on all major streaming platforms. With this moment and a relentless focus, Detox The Kid plans to embark on his journey by 'Keeping his ninja way" and sticking with Trapime.