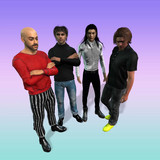 Miami's Jaialai blends dream-pop with shoe-gaze and psych for a captivating intonation. With members hailing from Venezuela, El Salvador, and of Cuban heritage, hints of their respective backgrounds and Miami culture are shined upon in their sound. The quartet will release As Sweet As I Was on March 12, their debut EP with Super Music Group. On As Sweet As I Was, each song tells a story and sets a mood throughout the EP. "These songs are more bouncy and melodic, which is odd considering they were written at the beginning of a global pandemic,” says Sardiñas. “But maybe we were trying to contrast the social climate.” “It's about the loss of innocence and the challenges of letting go and facing the world by yourself,” adds guitarist & vocalist Jovi Adames. “It’s also a reference to looking back and trying to learn from our mistakes and to find ourselves again amidst the world we are leaving at the moment.” Rounded out by Mario Lemus on bass and Richard Boullon on drums, Jaialai’s goal is to recreate a live feel in their records. Miami New Times says, “Jaialai has earned its title as one of Miami's most exciting rock bands” and As Sweet As I Was follows the release of last year’s debut LP Say So and Culebra EP in early 2020.