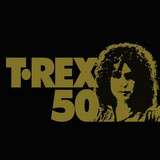 T.Rex – the creation of Marc Bolan, the band’s leader, creative director and sole song-writer – was born out of the late-1960s’ hippy counter-culture. Bolan’s road to superstardom took him from 18-year-old folk singer to proto-punk guitar thrasher in John’s Children, via the blissed-out Tolkien-washed mysticism of Tyrannosaurus Rex to fully-fledged Glam Rock idol in T.Rex. Following their breakthrough 1970 hit, Ride A White Swan, T.Rex became the biggest pop phenomenon of the new decade, scoring chart-topping, award-winning singles and LPs across Europe, the Far East, and Australia, while finding success in North America via the top-10 single Get It On (Bang A Gong) and hit albums Electric Warrior and The Slider. Decades after Bolan’s tragically early death, the influence of T.Rex is still felt across the music world. His status as one of the leading British music stars has recently been recognised with the induction of T.Rex into the Rock & Roll Hall of Fame.