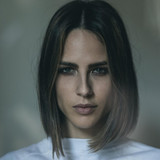 In just few years Slovenian selector Brina Knauss has achieved widespread notoriety and respect for her DJ skills, with influential figures such as Damian Lazarus and Luciano among her growing fanbase. Classically trained as a youngster, Brina has an exceptionally refined ear for key, chords and melodies, meaning her sets are full of emotional depth and transcendent atmospherics. On the road constantly since 2016, she has notched up a staggering number of gigs across Europe and the rest of the world, playing alongside some of the scene’s best-known DJs and booked to perform at high-profile events such as Rumors, Vagabundos and Get Lost. Still in the early stages of her DJ career, Brina Knauss is an accomplished music selector, whose scintillating sets have catapulted her into the limelight. An extremely hardworking, positive talent she injects soul, emotion and professionalism into every performance, leaving the dance floor with unforgettable experiences.