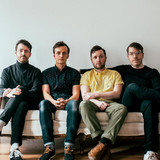 Paper Lions is a band whose music is heard by millions every year. There has been something about the familial blend of John and Rob MacPhee’s vocals, the band’s songwriting and arranging sensibility, and the feeling best felt at the live show that has resulted in the many champions that have rallied around the band. These supporters have led to experiences like performing at the northernmost human settlement on Earth, extensively touring North America and Australia, opening tours for artists like CAKE, and playing a wide range of venues and festivals around the world. It has led to millions of people discovering the band through online streaming and radio supporters like The Verge, Iceberg and The Peak. It has led some of the more attentive music supervisors, working with networks like ABC and NBC, to dig a little deeper to find the music of a band who has been hidden away in the remote Canadian province of PEI – better known for Anne of Green Gables, potatoes, and seafood than for pop music. Paper Lions’ is Colin Buchanan, John MacPhee, Rob MacPhee, and David Cyrus MacDonald.