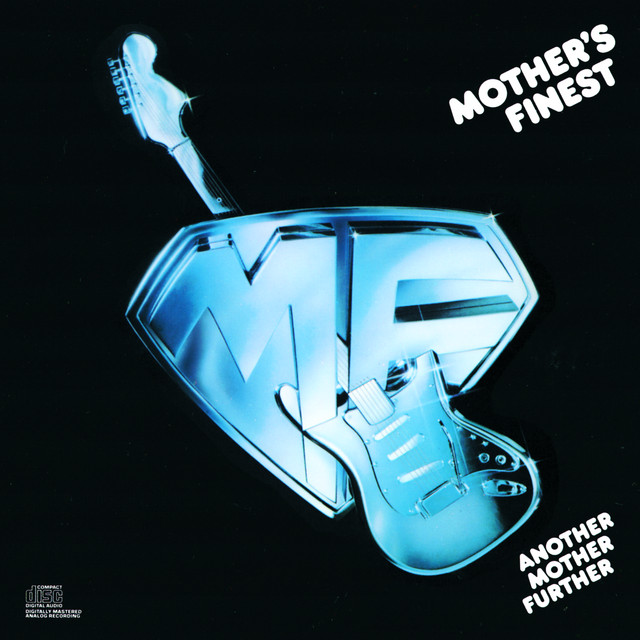 Georgia funk rock band Mother's Finest might appear to be only a blip on the radar screen of rock history, but not to any of the headlining bands they've stolen shows from -- or any of the audiences who saw it happen. Following in the footsteps of the racially-mixed Sly & the Family Stone, Mother's Finest blended white guitarist Moses Mo and drummer B.B. "Queen" Borden with black vocalists Joyce Kennedy and Glenn Murdock, bassist Wyzard, and keyboardist Mike, for its 1976 self-titled debut album. Tracks like "Rain" and the slightly controversial "Niggazz Can't Sing Rock & Roll" made enough of a ripple to get the band out of Georgia clubs and into regional touring. The follow-up album Another Mother Further lived up to its title. The opening track was a cover of the Holland-Dozier-Holland songwriting team's "Mickey's Monkey," made popular by Smokey Robinson. But the guitar riff was a blatant copy of Jimmy Page's from the Led Zeppelin song "Custard Pie," released two years earlier. Perhaps because the song was a cover, or the fact that they stole from blues legends early in their career, Led Zeppelin never sued and the track (along with others like "Piece of the Rock" and "Hard Rock Lover") helped make Another Mother Further the group's springboard. For the remainder of the 1970s, Mother's Finest became the most dangerous opening act in rock, blowing away headliners like Aerosmith, Frank Marino & Mahogany Rush, and Ted Nugent. A subpar third album, 1978's Mother Factor, took nothing away from the band's live performances, as vocalists Murdock -- and particularly the powerful Kennedy -- enthralled audiences over the funk rock backline of Mo, Wizzard, Borden, and Mike. The 1979 album Mother's Finest Live featured not only original staples like "Watch My Stylin'" and "Give You All the Love," but also Kennedy singing a stunning cover of Jefferson Airplane's "Somebody to Love" and the musicians shining on a rearranged version of Steppenwolf's "Magic Carpet Ride." It would prove a last hurrah, for Mother's Finest didn't translate well into the 1980s and never achieved its due in the largely-white world of rock. Mo, Mike, and Borden would leave the band, the latter to go polar-opposite by joining Southern rockers Molly Hatchet, but Kennedy, Murdock and Wyzard fought on. After dabbling in dance music with several different lineups in the 1980s, the trio formed an all-African-American band in the early '90s by recruiting guitarist John Hayes and drummer Dion Derek. The angry, rocking result was the 1992 CD Black Radio Won't Play This Record, which proved prophetic despite being the band's best since its 1979 live album (yet white radio wouldn't play it either). It's now in the cut-out bins; ignored or forgotten -- much like Mother's Finest -- by all except a select few. Still active, the group's latest CD is called Not Yer Mother's Funk -- The Very Best of Mother's Finest, and features mostly material from the first two albums. ~ Bill Meredith, Rovi