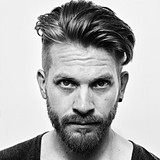 Logic Moon is Tobias Lorsbach, an artist from Mainz, Germany. His previous releases have appeared on labels such as Archives, Archipel and his own spontanMusik imprint across all physical and digital formats. He spent many years in the minimal techno scenes since the early 2000s and whilst out on a field recording excursion, he fell upon the idea of layering some Ambient drones. From here, his debut album as Logic Moon was born, Herbst11. Tobias’ musical background has drawn in a widescreen of genres with him having performed guitar in a death metal band, embarked on a DJ career and now as an Ambient musician. His varied experiences have only served to give birth to a range of ideas which are evident in his latest album ‘I See Planets’, clocking in at just over an hour. Compositions typically start life as a sketch on guitar before synth and additional components were added to build an environment.