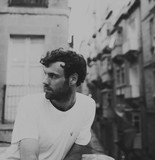 Enter Blanco White’s bewitching world and you won’t want to leave. Sensual songs unfurl like spells, time seems to stand still. Close your eyes and you could be dreaming. Magic, you’d swear, was at work. Blanco White is the guise of guitarist, singer and songwriter Josh Edwards, a Brit whose heart belongs in southern Spain and the Andean mountains. In the former, Josh fell for flamenco. In the latter, he learnt charango. Both are pivotal to Blanco White’s otherworldly tunes. A debut album is due this year, but already Blanco White is selling out venues he couldn’t have dreamed of when he began in 2014, having just embarked on a 3 month US and EU tour. A trio of increasingly accomplished EPs released between 2016 and last summer have seen him become a streaming sensation, a staple of thousands of Spotify playlists, now with fans all over the world. With every release Blanco White has gone up a gear, from the haunting acoustic sound of 2016’s The Wind Rose EP to the meatier, more expansive recent single Desert Days off his debut album ‘On the Other Side’ which is out June 5th 2020.