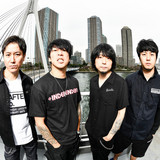 Japanese pop/punk quartet Ellegarden have become one of the biggest rock bands in their homeland, selling out 30,000 seat venues as a headliner and appearing at most of the nation's major rock festivals before bringing their explosive sound to American audiences. Ellegarden was formed in late 1998 when Takeshi Hosomi, who was working in the computer industry as an engineer, was approached by his friend Shinichi Ubukata, who played guitar and was looking for a singer to help him with his music. Hosomi had already been writing songs in his spare time, and with a strong background in English (he lived and worked in California for a while), he found himself writing his lyrics primarily in that language. Teaming with bassist Yuichi Takada and drummer Hirotaka Takahashi, Ellegarden generated a tight, punchy but muscular sound reminiscent of North American bands such as blink-182, Sum 41 and Good Charlotte, while also displaying the influence of Hosomi's favorites, Weezer. In the fall of 2001, Ellegarden signed with the Japanese Dynamord label, and released their first EP, Bare Foot, with a full-length album, Don't Trust Anyone But Us, following in the spring of 2002. The album was a hit, and Ellegarden followed with a new LP every year; 2006's Eleven Fire Crackers also became their first North American release when it was issued by Nettwerk in the summer of 2007. Accustomed to playing major shows in Japan, where they've shared stages with the Foo Fighters and Sum 41, Ellegarden made their American live debut in 2006 with a seven-city tour which included a stop at the South by Southwest Music Conference, where they played a well-received showcase set, with the enthusiastic audience demanding an encore that stretched their performance from five to eight songs. ~ Mark Deming, Rovi