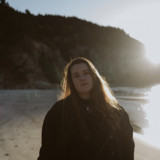 Abby Wolfe’s journey is just beginning. Hailing from Dunedin, the singer-songwriter found herself in Auckland in early 2017 navigating the ups and downs of being a self-managed, independent artist in the music industry. When a fellow Kiwi artist fell sick, she was offered a coveted spot on APRA’s 2017 SongHubs, where she met leading pop producers, Josh Fountain and Djeisan Suskov. The trio immediately hit it off and in the months after the chance meeting, they spent countless hours in the studio honing Abby’s songwriting craft and fine-tuning her sound. Abby’s first four singles Breakdown, Lonely In Company, Win You Over and Change My Mind sat squarely in the pop realm and have amassed more than 500k plays on Spotify, while receiving international blog attention and radio support. A desire to speak her truth lies at the heart of Abby’s songs and she is now readying herself to take on the next stage of her journey, which begins with the release of ‘Free Falling’ - a powerful and bold song, which sees Abby laying herself bare.