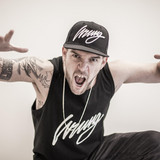 Born in the Hammersmith west London, Youthstar was into music from a very young age, relocated to France at just 16, and quickly discovered the Drum &amp; Bass scene in Bordeaux. He performed a load of shows around France with his partner at that time, Elisa do Brasil from 2004 to 2008. Then he linked up with the infamous Dirtyphonics and toured with them across the world for 3 years. As a true entertainer, Youthstar quickly came up in the scene and was nominated 4 years in a row (2012 - 2015) as "Best new comer MC" &amp; "Best MC" at the "Drum &amp; Bass Arena Awards" in London. He has worked with renowned Drum &amp; Bass and Bass Music artists from around the globe including Andy C, Netsky, Nero, Borgore, Metrik, Shimon and te list goes on ! Youthstar joined Camo &amp; Krooked in 2011 for their "Cross the Line" and "Zeitgeist" ours. At the same time, hebegan to work closely with Chinese Man. Invited for special shows more closely together and has now become the official rapper/MC of the group.