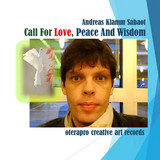 Andreas Klamm-Sabaot is born on February 6, 1968 in the city of Ludwigshafen am Rhein in Germany and working since 1986 both in the United Kingdom and Germany.

He is an artist, musician, music producer, singer, song writer, keyboardist and presenter of several TV programs on regional TV and online TV. He has produced and released five music albums and 74 singles.