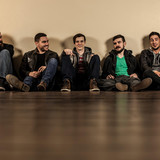 Hailing from San Antonio, The Black Market Club is an indie-rock quintet specializing in catchy lyrics, moving melodies, and driving riffs. The band has been described as "a taste of hardcore, a pinch of progressive rock, and a dash of upbeat indie-rock”, and has been compared to the likes of Circa Survive, Manchester Orchestra, and Local Natives. On April 5th of 2013, the band released their debut EP "Faults & Fractures", a culmination of experiences and feelings expressed through seven memorable tracks. In the first year, Faults & Fractures has gained a high level of recognition from multiple platforms, including the title of "second best cd" and "second best new song: Pieces" by the San Antonio Current. At the beginning of 2015, The Black Market Club announced it's sophomore EP, titled "MOVE"

The record was recorded at Hollywood Studios with producer Mack Damon, engineer Anthony Diaz De Leon, and master at Sterling Sound by Ue Nastasi. Three music videos were created for the songs "Juan Pablo," "Don't Mean Nothing," and "Falling," which won 2nd place in the first ever Riffs & Reels music video contest. Since it's formation, The Black Market Club has had the opportunity to share the stage with Bastille, The Naked And Famous, Minus The Bear, Andrew McMahon In The Wilderness, The Maine, Hawthorne Heights, Glassjaw, Emery, The Kin, Finish Ticket, The Rocketboys, The Soil & The Sun, Kellen & Me, Adema, and others.