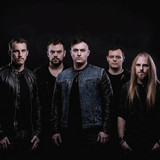 Dendera are a melodic metal band from the south of the UK, in 2013 Dendera released their debut full length album “The Killing Floor”, full of explosive drums, massive riffs and epic vocals. The album was very well received by magazines “Powerplay” and “Fireworks” and the band were tipped as a band to watch by Terrorizer magazine. 2015 saw the band release their follow up album “Pillars of Creation” the album was very well received by many publications and helped the band secure UK tours with bands like Queensryche and Fozzy. Dendera in 2017 released their EP “Part One: Blood Red Sky”. The EP showed a new aggressive side to Dendera’s style of heavy metal and really helped the band find the sound that people now associate with them. The EP helped Dendera secure a 23 date European tour with Gloryhammer and Civil War in January 2018 as well as festival performances at Bloodstock and Hard Rock Hell. Dendera have since shared the stage with bands like – Alestorm, Skindred, Saxon, Sepultura, Soulfly and many others. Winter 2020 sees release of the follow-up EP, "Part Two: Reborn Into Darkness", delving deeper into the heavier, darker energy at the band's core. Featuring guest performances from members of Thy Art is Murder, Chelsea Grin and Sabaton.