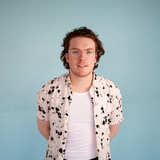 Gus Harrower is widely regarded as one of Scotland’s most innovative young musicians. Since the release of his debut EP in 2015, he has become a regular feature of the Edinburgh music scene and has made a name for himself, performing in a range of venues across the country; from Sneaky Pete’s in Edinburgh, to Glasgows 02, and most notably, a packed out Wembley Arena. He kick-started 2018 with his sophomore EP, Where We Were, venturing into a darker, more politicised approach to songwriting. The success of his latest EP has landed him a nomination alongside breakthrough artists Lewis Capaldi and Callum Beattie in the Scottish Alternative Music Awards. While his experience touring with Hit The Road was one of many catalysts for his mature development between his two EP’s. Having recently drawn comparisons to Bon Iver and Jack Garrett, his ability to write and perform infectious anthems has been recognised on BBC Radio Scotland as Janice Forsyth’s song of the week. His strength as an artist lies, not just in his technical skill but in his versatility. From melancholic melodies to upbeat rap collaborations his skill for taking listeners on a voyage through his personal experience is formidable. As a pianist, his marriage of jazzy pop and classical training produces a captivating unpredictability tied, invariably, to a gripping and cathartic resolution.<br>