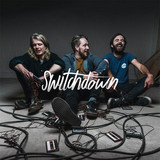 Known for their high energy live sets and room filling sound, the three highschool friends draw clear similarities from the likes of early Lower Than Atlantis and post-grunge group Dinosaur Pile-Up. switchdown infuse their alt-rock riffs with punk vibes, though not without the odd ‘pop’ hook. Based in the greener shires of Leicester, the DIY band first hit the scene in Spring 2018 and have since supported the likes of Can’t Swim, Mallory Knox, Woes, and Lizzy Farrell. Sam (guitar/vox), Joe (drums), and Harry (bass) first became close friends in highschool, starting bands that never quite got round to being named, and pushing each other into Enter Shikari mosh pits. Fast forward a few years to Summer 2017, having all earnt degrees, they found themselves slowly coming to terms with life outside of university. Emerging from the gloom of job searches and mid-afternoon wakeup calls, their first single ‘Spark’ was charged with optimism and ideas of fresh starts. Despite being written before the band had even begun, the fast paced track helped set the tone for their future creative endeavors - a solid platform for them to start making a lot of noise.