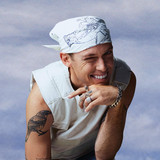 Harry Hudson is no stranger to defying expectations. The singer-songwriter embodies an unwavering self-assurance and wisdom well beyond his years. After surviving a battle with cancer, Harry has channeled his emotional roller coaster into supremely visceral and boundary-shattering pop music. On Harry’s 2020 sophomore album, Hey, I’m Here For You (MSFTS/Roc Nation), he explores the importance of learning to be there for himself to be there for others.

Hey, I’m Here For You follows Harry’s stunning 2018 debut album Yesterday’s Tomorrow Night, a highly personal, soul-infected batch of pop music which racked up more than 35 million streams and featured single “Yellow Lights” which reached the Top 10 on Spotify’s U.S. Viral Chart. In addition to the album, which was released via a joint partnership between Roc Nation and his close friends Willow and Jaden Smith’s MSFTS Music, Harry also released the short film Can Cowboys Cry as a homage to his father who passed away earlier that year. A creative soul and global citizen, Harry is fast becoming one of the music industry’s most intriguing voices. Using his own life experience to help other young people, Harry is an ambassador for Teen Cancer America, an organization that works to improve the experience, outcomes, and survival of teens and young adults with cancer by providing facilities and programs designed especially for them in hospitals throughout the USA.